During the ’80s, Boston Whaler made some of the best boats ever. Safety, simplicity, versatility, practicality, and quality were trademarks of these boats. Sadly, these boats are no longer built, but fortunately, they make some of the best-used boats ever. Classic Boston Whalers also hold their value better than any boat on the market. Below are the best ones to buy. The Montauk 17 is the most popular Boston Whaler of all time and is, likely, the best boat the company has ever built. Unsinkable like every other Whaler, the Montauk 17 is the complete package, offering simplicity, versatility, and ease of ownership.

The simplicity of the Montauk was evident in many features like portable fuel tanks, a reversible pilot seat, a self-bailing hull, well-placed grab rails, mechanical steering, and efficient power. Consequently, it’s that simplicity that makes today’s used versions easy to modify or maintain. Nearshore fishing, waterskiing in the bay, and sandbar hopping with friends are a few of the things that the Montauk can do well. The boats’ versatility makes it super popular and the ultimate all-around boat.

HOW TO DRIVE A BOAT WITH CONFIDENCE (ONLINE COURSE)

The Classic Boston Whaler Montauk can fit in most garages, is easy to clean, burns minimal fuel while running, and is incredibly stable and dry. Additionally, the boat doesn’t require a truck to trailer, sits on a single axle trailer and its external fuel tanks allow you to fuel the boat by simply taking them to your favorite gas station. The Outrage 18 is an amazing boat. Like the Montauk, the Outrage 18 is simple, versatile, and easy to own. Unlike the Montauk, it offers a much softer ride and is heavier, primarily due to its’ internal, 63-gallon fuel tank. In 1991 the company changed its’ name to the “Outrage 19” but it is the same boat. In 1992 the boat was completely redesigned and isn’t nearly as sought after.

One of the things that makes the Classic Boston Whaler Outrage great is its’ abundancy of beautiful woodwork. Louvered teak doors, teak fire extinguisher pockets, and teak gunwale boards are commonplace among these boats. For those who desired less wood, Whaler also offered optional fiberglass gunwale boards. As a result, many of the used Outrages today can be found without as much teak. Also, beginning in 1991, teak was no longer offered on the standard console. In my opinion, the best years for the Outrage 18 were 1988-1990 primarily, because they have all the “classic” features with the addition of welded bow rails. HERE’S A GREAT LOCATION TO USE A CLASSIC BOSTON WHALER

The Outrage 22 has a standard 77-gallon fuel tank but also can be found with the optional 129-gallon tank. The 22 was most commonly powered with a single outboard but could also house twins. The maximum horsepower is 240 hp (300 hp with optional “Whaler Drive” stern bracket). Like all Outrages, the boat rides dry and handles the seas very well for its’ size. All the Classic Boston Whaler Outrages have internal fuel tanks. Over time, those tanks are subject to water intrusion and need to be replaced. When purchasing a new “classic”, it’s something to be aware of. My advice is to check for soft spots on the deck. If you have soft spots than you will have to repair them. If you have to repair them then you’ll have to remove the deck. If you remove the deck, you might as well replace the fuel tank since it’ll save you a ton of time and/or future labor costs. 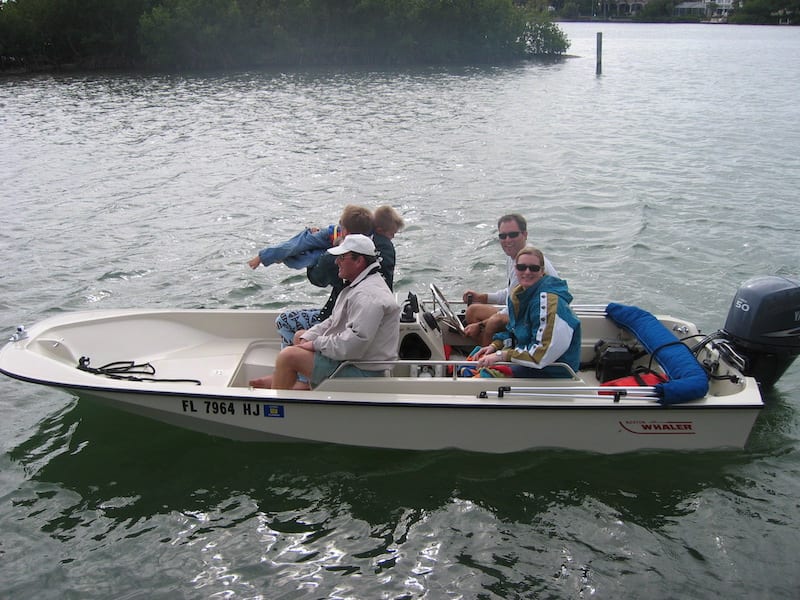 The Sport 15 has the nicest lines of any small boat that I’ve ever seen. Besides its’ good looks, the Sport 15 is perfect for lakes, inshore fishing, and watersports. Like the Montauk and other Sport models, the Sport 15 has a self-bailing cockpit, beautiful woodwork, and a simple design.

When I was a kid the Sport 15 was my dreamboat. Although I didn’t own one at the time, one of my friends did. It was a boat that was fun to drive, went incredibly fast, looked amazing, and was super-safe. It is these reasons that still make the Sport 15 a kid’s dreamboat today.

The small size and lightweight of the Sport 15 allows it to easily be stored in a garage and moved manually. Low gunwales make it easy to climb in and out of the water. Its’ hull design provides a smoother ride than the smaller “Sport 13” and the option of mounting a 70hp motor to its stern offers incredibly efficient speed. I think the Sport 15 offered the most choices within the Boston Whaler lineup. This same hull was offered in the following models; Sport, Super Sport, GLS, Mischief, Striper, Center Console, and the Super Sport Limited.

My favorite model is the basic Sport 15 or Sport 15 GLS. The beauty behind this model today is that they can easily be modified or refreshed simply by replacing or restoring the interior woodwork. The Sport 13 is the most famous Boston Whaler and the boat that started it all. For many of us, these boats were the reason we fell in love with the water. They bring back amazing memories and represent simple times.

Like all the “Sport” models, the Sport 13 is unsinkable, basic, and easy to use. Most of the models came with mahogany interiors and the older models had blue interiors. The various Sport 13 models include the Standard (shown in the photo above), Trophy, Sport, Sport Sourpuss, Super Sport, Super Sport Limited, GLS, and the beautiful 40th Anniversary Limited Edition. The most popular is the Sport.

Perfect for Kids and as Tenders

The most common uses for these boats today are as kid’s boats and yacht tenders. They are perfect for kids because they are easy to drive, easy to board, and, like all other Whalers, are unsinkable.